How does
Acupunture Work?

Learn how acupuncture works to relieve pain and stress through the following scientific model.

How does Acupuncture Work?

Many people have learned about acupuncture from an energy model with roots, not in ancient Chinese medical texts, but in Western misinterpretations of those texts.

Acupuncture’s power has a scientific basis.

What follows is a scientific model for acupuncture’s ability to relieve pain and to heal.

Four aspects of a mind/body that need to be functioning well in order to be healthy:

1 – Qi (Oxygen) delivery to the tissues

Any of the body that is damaged due to trauma or an internal disorder will have difficulty recovering if there is a reduction in blood flow to that area.

Number one Etiology of Chinese Medicine: Blood Stasis
– Blood is not circulating sufficiently to the affected area.
– The body loses its ability to heal itself because all the healing agents of the body are found in the blood.

Chinese Medicine understood the neural-fascial connections between different parts of the body before anyone in the West did.

For example, when a sciatic nerve is compressed, either from a herniation in the lower back, or from neurogenic inflammation in a muscle in the glutes, distal needling alongside the area just lateral to the Achilles tendon provides great pain relief and improvement in range of motion.

The ancient Chinese determined thousands of years ago that acupuncture right along both sides of the spine had therapeutic effects.

Today’s Acupuncturists see confirmation of Chinese Medicine’s wisdom about these Acupuncture points in the knowledge of modern science.

For example, we know from science that there are dermatomes or regions along the skin of the body, that are mainly supplied by branches of a single nerve root in the spine. The muscle that underlies the skin is also innervated by a branch of particular nerve roots.

Thus many Acupuncturists are now performing what are called perfusion treatments (needling one or more of these three sets of spinal levels), to treat problems in extremities or in the digestive system that can benefit form improved circulation.

Just one more example of Chinese Medicine’s sophisticated understanding of anatomy that predates Western sophistication by thousands of years!

2. Proprioceptive Nerve Fibers
Tells the brain the location of the pain: where the “ouch” is at.

Patients with chronic pain
The proprioceptive neural threshold is too low.
Signal to the midbrain is weak.

In summary: Acupuncture creates a strong stimulation and “reboots” the proprioceptive nerve pathway

We keep needling and jumping the threshold until the body REMEMBERS and RE-ESTABLISHES the normal threshold to signal the brain.

What is an Acupuncture Point?

According to the ancient Chinese medical texts, the Xue/Mai (translated literally as blood/vessels), which are commonly called “acupuncture meridians” today, is simply the major longitudinal blood vessels of the body. Many of the body’s sensitive locations along the pathways of these longitudinal vessels (superficial locations of nerves, blood and lymphatic vessels, neuromuscular attachments or where vessels and associated nerves penetrate muscle fascia) are coincident with nodes that are today called “acupuncture points.”.

Many people who have been influenced by esoteric Western interpretations of Chinese texts believe that these nodes or points lie along “energy” pathways or “meridians.” However, as one can see in the picture above, acupuncture nodes are not points along invisible lines of “energy,” but small areas that are located above the deeper longitudinal vessels, and the more superficial fine vessels of the circulatory and lymphatic system that lie along nerve pathways. 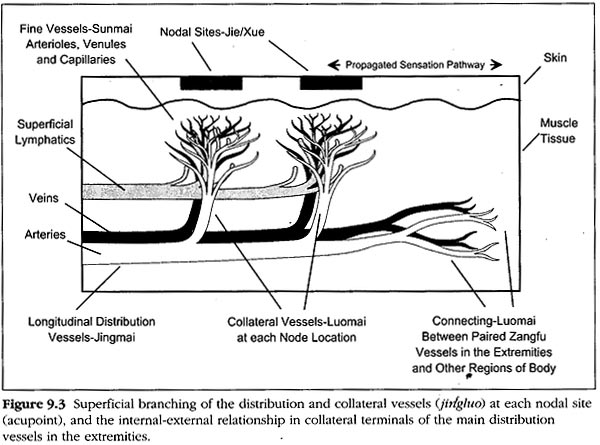 From Donald Kendall’s The Dao of Chinese Medicine

Characteristics of an Acupuncture Point: These points or nodes have interesting qualities that elucidate their special use for acupuncture. Some correspond to motor points or Golgi tendon organs. Relative to non-node sites, acupuncture nodes or “points” also have a higher electrical conductance and a larger concentration of neural and fine vascular components, along with a greater distribution of mast cells.

Learn More About Our Acupuncture Services:

How Does Acupuncture Work?

Schedule your appointment by phone or online.